Every post up until now has included a location, but this one will remain secret to protect this incredible species, as it is endangered.

I should also be clear that I do not advocate fishing for endangered species, nor do I actively target them. That said, as an avid angler who has averaged 100-220 days on the water annually for a decade, I do catch endangered fish from time to time.

When that happens, I take care to handle the fish properly, release them as quickly as possible, and ensure these scarce and vulnerable fish are treated with the utmost respect.

Interestingly enough, as a friend and dedicated biologist once told me, “It’s a shame we live in a world where we’re supposed to feel bad for accidentally catching these amazing fish.” So I don’t feel bad; I feel honored. I view every incidental hookup as a chance to set a positive example, a chance to, in my own way, offer condolences and make amends to a species for what my own did to it.

I also view it as a promise, a promise that I will do everything in my power to help and support the future of these fish so that one day we can target what have the potential to be truly world-class freshwater gamefish.

When I caught this Lost River Sucker, I wasn’t really expecting it. A friend had told me he’d landed several trout and a surprise sucker in that general area earlier that month, but it was so cold and snowy, I had pretty well tempered my expectations.

Then I got a bump.

When fishing steelhead jigs in Upper Klamath Lake, I usually throw out, wait a second or two, then twitch up. I repeat this sink-jerk motion on most retrieves.

Trout usually hit on the initial drop or during a subsequent jerk.

The fish pictured below was no different.

I hooked and lost another good trout before a wind knot distracted me long enough to allow the jig to sink to the bottom. I expected to be snagged, so when I pulled up and felt weight, I wasn’t surprised. Until it moved.

A trout had grabbed my jig off the bottom, and I was thrilled.

It started sucking line off my reel so viciously that I imagined I’d hooked into something big. I wasn’t wrong.

When the fish jumped and did a front-flip out of the water, I noted how unusual it was for trout to jump like that in cold weather. Our Redbands jump, but if you fight them with skill, you can usually avoid this. Not always, but usually.

When it jumped a second time, I noticed how dark it was.

When it jumped a third, fourth, and fifth time, I realized it wasn’t a trout.

In 1984, the Lost River Sucker was listed under the Endangered Species Act.

My Species #83, endangered in ’84. Is that darkly poetic? I don’t know, but it certainly adds value to a species I already treasure.

I landed that fish, and it was, in fact, a Lost River Sucker. It wasn’t huge, but I’ve since caught quite a few of them, and many have been over 10 pounds.

These fish live upwards of 30 years, and the average fish I’ve caught has been about 26-28 inches long and weighed in between six and nine pounds depending on whether it was male or female, pre-spawn or post-spawn.

Tragically, almost all spawning fish are 15 years old or more, with many of the spawners in their 20s and 30s.

If recruitment does not improve, these gorgeous fish will be extinct within my lifetime, likely before I go gray.

Not wanting to disturb the fish too much or risk snagging one, I threw a few more casts before calling it a day.

There are more than a dozen sites in the lake where they spawn, and you don’t have to look far to find dead fish in the spring. Some die of old age, some of disease, some of predation or the pressures of the spawn, but an unacceptable number are caught and killed intentionally by anglers. Either snagged with treble hooks or hooked legitimately with worms, many ignorant anglers throw them on the bank even now, some 30 years after it became clear the species was at risk of extinction.

I’ve snagged my share of suckers over the years while trout fishing, and for that reason, I now only use single hook lures (typically either swimbaits or jigs) in places frequented by Lost River Suckers. 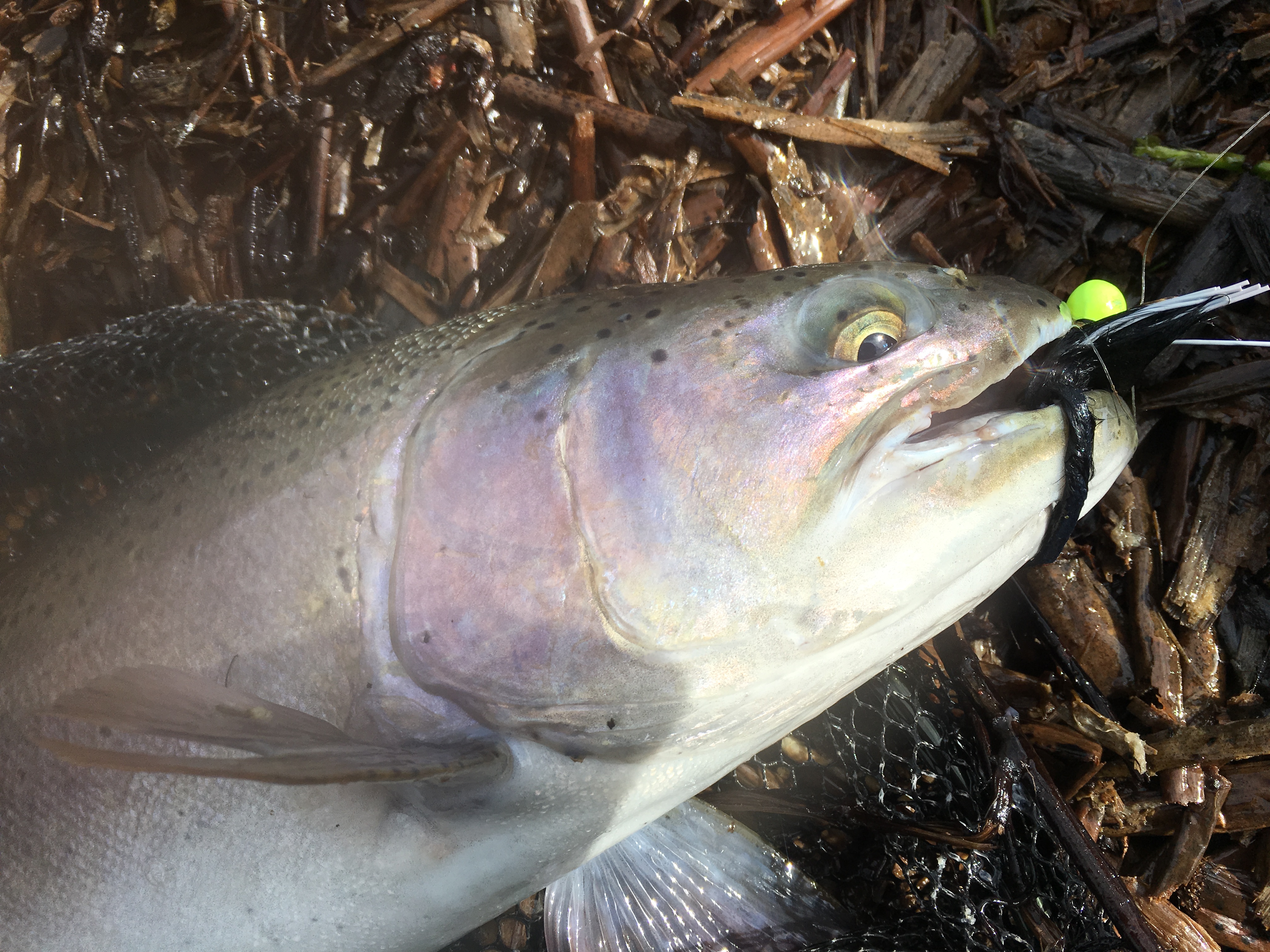 Again, use jigs and single-hook swimbaits only when fishing around spawning sites. You might snag one even still, but it’s unlikely. If you do, it will cause less damage. The trout still readily take these jigs, too, so don’t fret.Though the trout fishing in that spot where I caught my first blued-up male is phenomenal (the trout come to eat sucker eggs), I hesitate to fish there for fear of snagging a sucker on traditional trout gear. When I do try for trout there now, I’m careful to only use jigs and swimbaits with single hooks. No spinners, spoons, or Rapalas.

I’ve seen people intentionally snagging them in the back, and anyone throwing a treble hook out there knows what they’re doing. Not only is it disgusting and irreverent, it’s highly illegal.

The suckers, often erroneously called “sucker fish”, are a treasure that should be appreciated. These fish grow to 40 inches and 20 pounds, and I’ve never caught one that didn’t jump. The potential for a sport fishery if and when this species recovers should be enough incentive to treat them with respect, but if it’s not, know this. If the suckers die out, the greatest wild native Rainbow Trout fishery in the United States — the Klamath Basin — will suffer.

The single greatest draw for tourists will suffer.

The community will suffer.

A few things to note if  you do catch a sucker:

1) Handle it as little as possible. Some intepretations of the law suggest even posing for a photo is illegal. The maximum of 10 seconds I’ve taken to pose for a picture with my larger suckers was a risk I was willing to take. I released them quickly, but know you could potentially get in trouble for doing so.

2) Keep it wet. Measurements can be done in the water (if at all) and should not result in unnecessary air exposure.

3) Keep the location secret. If you do find the suckers, especially during the spawn, don’t share that information. For one, there are people out there still who would massacre them. Don’t take that risk.

Sometimes, I set my rod down and just take pictures of the fish while they spawn. If I move slowly, I can get surprisingly close and get some great pictures.

Avoid standing on gravel, but if you happen to float by or see one from the, it’s completely okay to take a picture. I like taking pictures of them to show others the beauty I see and inspire action to protect these amazing fish.

The Williamson River holds most of the suckers I’ve seen, but they can be anywhere. For that reason, I’m careful to use only single-hook lures when they’re around — just in case.

Last summer, I snagged a massive sucker while trolling at Rocky Point that was every bit of 15 pounds. I fought it almost 10 minutes, and it tail-walked half a dozen times. It pulled my kayak almost half a mile before the hook came out. Since that day, I’ve stopped trolling spoons.

As great as these fish are, and as fun as it is to catch one incidentally, the stress of being snagged could kill a fish, and that means one less spawner. Don’t risk it.

I initially wrote about these amazing fish here and gave the impression I was urging people to fish for them. That wasn’t the case. In my follow-up article, I emphasized that it is illegal to target them, but I’d love to see this species recover so that is no longer the case. Wouldn’t you?

Read the next entry in #SpeciesQuest here: Species #84 — American Shad.