I’ve made some dumb choices over the years when fishing. Putting aside the ones that caused me physical harm, wasted time, and damaged gear, I still had plenty of things I would change.

For starters, I would take better pictures.

So many of the pics I’ve taken over the years for my “Lifelist Photo,” have been great. The fish is on a solid background (preferably in water or on damp vegetation), and is fully visible, facing to the right.

Left-eyed flatfish aside, I’ve mostly been able to accomplish this for most species — especially those caught within the past few years.

But not for Florida Bass.

I caught my first one by hand at night when it wouldn’t take anything else, just to say I did.

Of course, I wouldn’t count that because it wasn’t a legitimate catch.

I returned the next day and caught four more, all larger than my initial micro. As I spoke with the local anglers and found spots to fish, they all mentioned “Florida Bass,” but I just assumed they meant the “Florida Strain Largemouth” prized for their fast metabolism and ability to attain a greater size.

In 2002, though, they gained official status as their own species, Micropterus floridanus.

Though a few organizations contest this, the consensus is that they are their own species, and the simple disparity in their size and coloration would reinforce this to the layperson.

I failed to realize that “Florida Bass” were anything special, and since largest one didn’t even break three pounds, I failed to take one picture.

I didn’t even add it to my Lifelist until 2019, fully six months after I caught them, because it was only then that I learned it was a separate species, acknowledged my most powers that be.

Since my Lifelist is only for me, really, I count it without the picture. I caught nine total that trip, and I was even with half a dozen other anglers for some of those catches for several.

Chris Fowler, an Austin-based angler who specializes in European-style carp fishing and flyfishing for bass and carp, was one of my witnesses. He caught a nice three-pounder on the fly, and I took a picture of it. Mine were all smaller, but I caught them.

I’ll just need to add Florida Bass to the list of about a dozen species I never got good “Lifelist Pics” of. It shouldn’t be that difficult, right?

Read the next entry in #SpeciesQuest here: Species #135 — Florida Gar.

As I drove across the West on my way to Commissioned Officer Training (COT) in Montgomery, Alabama, I carefully planned my route to include stops at places I wanted to see. From Klamath Falls, my first long day of driving ended at Salt Lake City, and I stopped in at Utah Lake in nearby Provo for an evening of fishing.

Utah Lake is home to several species of Utah natives, including the endangered June Sucker, and though I hoped I might luck into one of these embattled fish, I realistically hoped to catch both a White Bass and a Channel Catfish — two invasive species that I’d never hooked into before given that the former doesn’t exist at all in Oregon, and the latter is very rare.

I found myself at the mouth of the American Fork where I hoped the flowing water would congregate fish looking for respite from the summer heat.

All I had for bait were worms, and I set up my first rod with a crappie rig that included two small baited hooks on dropper loops.

Before I could even tie a lure onto my second rod, the first dipped, and I was holding my first White Bass.

The spunky little dude was what I had hoped for, and it came so easily that I expected something bad to happen that night.

I landed several more White Bass that night, but the two other species I landed were what made the stop so worthwhile.

Read the next entry in #SpeciesQuest here: Species #87 — Channel Catfish.

The fact that I lived three hours from Shasta Lake and didn’t catch a Spot for nearly 26 years is pitiful. Granted, I only fished Shasta like twice and then only for trout, but still, it’s a disgrace.

You know what’s even worse? Since I caught this fish, I haven’t fished Spot water, and I haven’t caught another.

Marcus Moss, Zach Wieting, and I decided to head to Shasta on New Year’s Day to chase bass. I mean, they’re supposed to feed actively all winter in warmer climates, and Redding is certainly a warmer winter destination than Klamath, so it seemed like a good bet.

It didn’t start off very well, though.

The water was so low, each of the three ramps Marcus usually fished were well out of the water, and we had to tool around until we found one at Bridge Bay that was usable. It was still a good 10 feet out of the water, but boat ahead of us seemed to have no trouble, so we went for it.

Already, more than an hour of fishing time had burned up when we got the boat in the water. None of us had waders, and the dock was too far from the boat, so the complications continued.

I volunteered to get wet (smart in mid-winter, right?) because I didn’t want to give up.

Once we got the boat in the water, it wouldn’t start.

Another hour passed as we re-trailered it, fiddled with it, and finally got it purring.

By now, it was well past noon, and it was supposed to be dark in four hours.

We spent two of those hours getting one fish apiece, all on deep-diving 10XD Crankbaits and then called it a day when the wind picked up past 25 MH.

Read the next entry in #SpeciesQuest here: Species #73 — Copper Rockfish.

This is the fifth and final story in succession and ties in with the other species I caught on the same day, and you’re best reading them in order: First and Second and Third and Fourth.

The California Delta is famous for bass. Largemouths, Stripers, and Spots all call this area home. I’d love to fish it some day.

This story, however, takes place nearby in the San Pablo Bay, and it involves Stripers.

Years before, after personally striking out for Stripers in the San Pablo Bay but watching my friend, Christopher Puckett, land a double-digit fish, I saw the possibilities.

It was now almost four years later, but I’d booked the trip in hopes of catching sharks, stripers, and sturgeon. We’d already boated three species of shark and lost a fourth, massive one, but the sturgeon and Stripers remained quiet.

Then, Ben Blanchard got a respectable fish of around eight pounds.

Not long after, he caught a second, slightly smaller fish.

I’d boated four new species that day, so I couldn’t complain, but since this was a trip where we intended to target three large, edible fish, I’d hoped to take home some meat.

Eventually, a Striper of my own inhaled the shrimp on my hook, and after a fight in which the captain jumped up and down hooting and hollering in excitement, it came to net.

It was 13 pounds, 1 ounce and measured 33 1/2 inches long, making it the largest fish (other than the two Bat Rays I’d caught earlier in the day) I’d ever caught and the largest game fish.

The fish was delicious, making me promise never to release a legal Striper. Plus, the picture Ben took was one of the best fishing pictures I’ve ever had taken of me, and it remained one of my favorite profile pics for years. If only I’d removed the hook the captain put through its lip beforehand…

Read the next entry in #SpeciesQuest here: Species #48 — California Halibut.

Cross County Camp was great. I mean, apart from running 80 or 90 miles in a week, it was awesome.

We always stopped and ran along the highway before we even arrived at our destination: Lost Creek Lake. In those days, I was a veritable gazelle, and though I still didn’t like running, I was young, fit, and I managed.

Our first day was hot, busy, and full of running. Much of that running took us along the paths that skirted the lake shore. The entire time, I just kept thinking of the myriad fish swimming beneath the alluring surface.

When Day 2 rolled around and we had some free time to rest and not run, I grabbed my fishing pole and, you guessed it, ran. I ran harder and faster than I had in two days, heading straight to a small inlet where we’d seen bass sunning themselves the day before.

I threw a curlytail crappie jig out and worked it every way I could in the summer heat.

When I finally convinced one of the fish to hit, it didn’t matter that it was only four inches long; it was a new species! It was my first Smallmouth Bass, and I was ecstatic. Even though I didn’t catch another fish during my narrow window of free time, I ran back to camp happy. And sweaty. But mostly happy.

Read the next entry in #SpeciesQuest here: Species #14 — Green Sunfish. 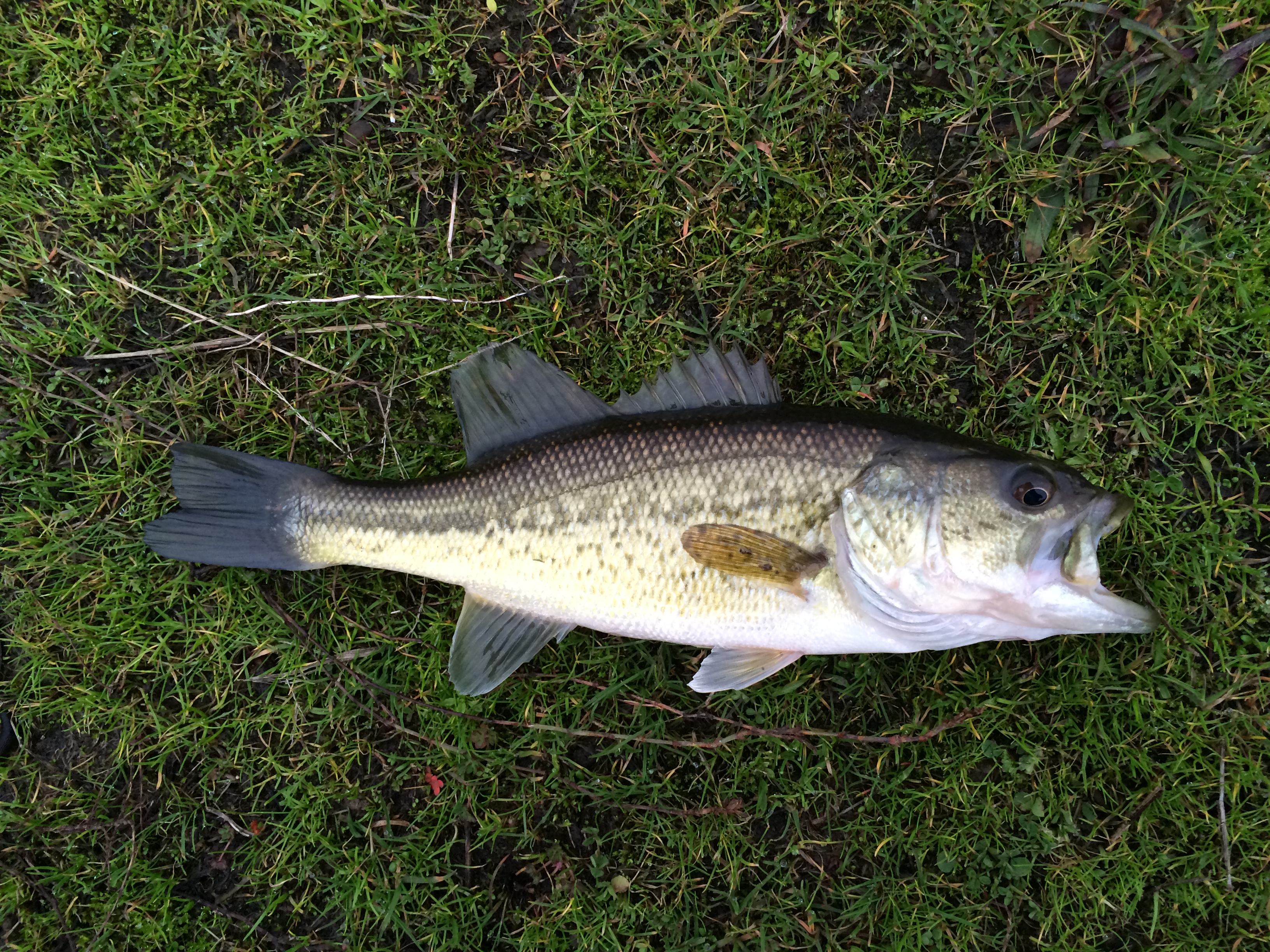 Bass fishing is the closest thing the fishing community has to professional sports. A handful of the top competitors even make a living off of it. The millions of dollars spent on endorsements, the fact that people actually watch it on television, and the sponsors lining up to put their stickers all over bass boats make it unlike the rest of the fishing world.

My first bass was so unglamorous that Kevin VanDam will probable never give me a second look. I caught it a seven-inch fish on a gold crappie jig.

It was about eight feet below me, and it was hot enough that it didn’t fight hard.

That’s it. My first bass. I wish it had been more romantic, but it was hot and dirty, and I wondered why it was so highly praised.

Read the next entry in #SpeciesQuest here: Species #7 — Brown Trout.