This is the fifth and final story in succession and ties in with the other species I caught on the same day, and you’re best reading them in order: First and Second and Third and Fourth.

The California Delta is famous for bass. Largemouths, Stripers, and Spots all call this area home. I’d love to fish it some day.

This story, however, takes place nearby in the San Pablo Bay, and it involves Stripers.

Years before, after personally striking out for Stripers in the San Pablo Bay but watching my friend, Christopher Puckett, land a double-digit fish, I saw the possibilities.

It was now almost four years later, but I’d booked the trip in hopes of catching sharks, stripers, and sturgeon. We’d already boated three species of shark and lost a fourth, massive one, but the sturgeon and Stripers remained quiet.

Then, Ben Blanchard got a respectable fish of around eight pounds.

Not long after, he caught a second, slightly smaller fish.

I’d boated four new species that day, so I couldn’t complain, but since this was a trip where we intended to target three large, edible fish, I’d hoped to take home some meat.

Eventually, a Striper of my own inhaled the shrimp on my hook, and after a fight in which the captain jumped up and down hooting and hollering in excitement, it came to net.

It was 13 pounds, 1 ounce and measured 33 1/2 inches long, making it the largest fish (other than the two Bat Rays I’d caught earlier in the day) I’d ever caught and the largest game fish.

The fish was delicious, making me promise never to release a legal Striper. Plus, the picture Ben took was one of the best fishing pictures I’ve ever had taken of me, and it remained one of my favorite profile pics for years. If only I’d removed the hook the captain put through its lip beforehand…

Read the next entry in #SpeciesQuest here: Species #48 — California Halibut.

This is the third story in succession and ties in with the other species I caught on the same day, and you’re best reading them in order: First and Second.

In the United States, Atlantic Cod is the fish most commonly used in Fish and Chips, but in England and most of Western Europe, it’s dogfish.

Dogfish of the family Squalidae are a widespread shark that don’t grow very large but still finds their way into nets worldwide.

For whatever reason, North Americans don’t love dogfish as much as Europeans, but they’re missing out. One of the few meals I enjoyed in Portugal was Dogfish Soup and one of the few I enjoyed in Spain was “British-Style Fish and Chips” made of dogfish.

Unfortunately, when I caught my first dogfish, I didn’t know this. So, at the advice of the captain, I released it. Then Ben Blanchard released his. We caught several of them that day, and though they were small, we missed out on some good meat. 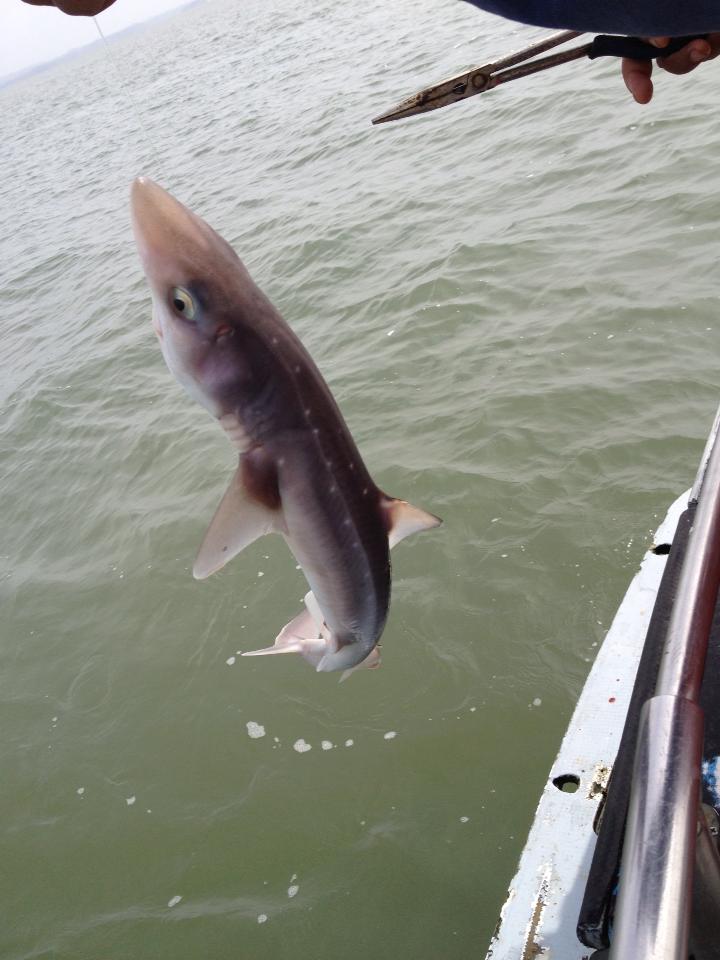 Spiny Dogfish have a dorsal spine that can be dangerous, so the captain wouldn’t let me pose with it. Sadly, the only picture of these fish we caught is the one above.

Missed out on meat and a good picture. Live and learn.

Read the next entry in #SpeciesQuest here: Species #46 — Leopard Shark.

If you didn’t read the last entry, be sure to catch up here or you’ll be missing out. They tie together.

I’ve fished the salt a lot in the past 15 years. Not anywhere near as much as freshwater, but I’ve still spent an average of five days a year fishing saltwater which is a lot for someone five hours from the ocean.

In all that time, I’ve only landed two fish over 25 pounds.

Both happened to be on the same day, minutes apart, while chasing sharks, sturgeon, and stripers with Sole-Man Sportfishing.

The first was a massive Bat Ray. It’s body was maybe 30 inches long (not including the three-foot tail) and 40 inches wide. The captain estimated it at 60 pounds but wouldn’t bring it on board because it presented a safety hazard.

So all I have of the largest fish I’ve ever landed in saltwater is this picture.

While I would’ve liked a better picture, fighting this creature on 20-pound mono was a blast. Imagine pulling a piece of sheet metal with suction cups off the bottom. But the sheet metal pulls back. Hard.

After catching the 60-pounder, I got a smaller one the captain estimated at around 40 pounds. Though I’ve caught a lot of 10-20 pound saltwater fish, I haven’t broken 20 pounds in the salt since.

Fortunately, I did manage a few pics of Ben fighting a beast of his own, and that’s where this story ends.

Read the next entry in #SpeciesQuest here: Species #45 — Spiny Dogfish.